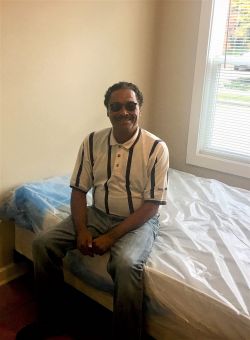 Read Robert's story from CASA below:

“I was very overwhelmed by that,” he says, as he sits smiling in the recliner the volunteers brought him.  “I feel so blessed, I really do.  I never expected this.  I’ve never been given anything.”

Originally from Dunn, Robert moved to Raleigh after he lost his home in a fire.  Robert is epileptic and his kitchen caught fire when he was cooking and had a seizure.  “I’m afraid to use the stove now,” he says.  “I didn’t have insurance on the house, so I just left.  I had to start over again.”

Robert moved to Raleigh and stayed in a homeless shelter for a year.  “When I finally got enough money saved up,” he says, “I moved into an apartment and stayed there for four or five years. Then the owners sold,  and when the new people got it, they went sky high up on the rent, which I couldn’t afford.  So I left.  Since then, I’ve been going place to place, back and forth.  It’s been hard.”

During that time, Robert would stay in a motel when he could, “but when I ran out of money, I would sleep on the streets.  The hardest part about that was the next morning, not knowing where to take a shower, not being clean.”  The only way he survived, Robert believes, was through the help he received from other people experiencing homelessness.  “I met some of the smartest people you’d want to meet, and they showed me the ropes – where to eat and get clothes and so forth.  To me, they were angels.”

Two years after he first submitted his application, CASA called Robert and told him an apartment was waiting for him.  “It blew my mind,” he says, laughing.  “Everything worked out!”  Now, he has a safe space for his two prized possessions: a keyboard and a bass guitar.  “Music has always been my passion,” Robert explains. “When I play, I’m kind of in my own zone.  It’s so relaxing.  It’s a feeling I can’t explain.  It seems like when I start playing, I close my eyes and God just guides my fingers.  It’s so fantastic.”

Now that he has a place to live and some basic furnishings, Robert is looking forward to the future.  “I’ve already worked out my budget,” he says happily, “and I’m saving up to do things that I like to do.”  He is reconnecting with some of his musician friends and looking forward to performing again.  In the meantime, he’s really looking forward to Thanksgiving, which he’ll spend with family.  “That’s my favorite holiday, because everybody is going to be together.”

Go back | Show other stories